In early articles, I made clear that we need to be radical in curbing social encounters, and in protecting against infectious contacts, both to control the COVID-19 pandemics, and to secure a working healthcare system that may maximize the care to the contaminated.

I also made clear that successful examples existed, especially when it comes to (some, not all), Asian countries. While procastrinating for a while during the Lunar New Year, China aggressively scaled measures after it was recognized by Jan 20 that COVID-19 was a major human to human transmission disease. Those measures included limiting mobility, remarkably, no public transport and no car in Wuhan were imposed in 5 days, an aggressive tracing of even mild cases via technology based predictions, a strict imposition of quarantines regarding any suspected case, and an enforced policy of protection via masks in public, etc.

2. The global status today: we are not winning

As a result of its measures, China has been controlling the pace of the pandemics, yet it is one of (the few) exception(s) that confirms the rule. We are too slow to act, not agile enough to test, and not imposing enough to take control. In fact, since the pandemic was recognized, about 200 countries have recorded COVID-19 contamination cases. Using a normal range of contagion period (e.g. 8.5 days), we compute that, at this current day (March 28), more than 90% of countries are likely still on the accelerating part of the pandemic development.

Figure 1: How countries are (not) taking control COVID-19 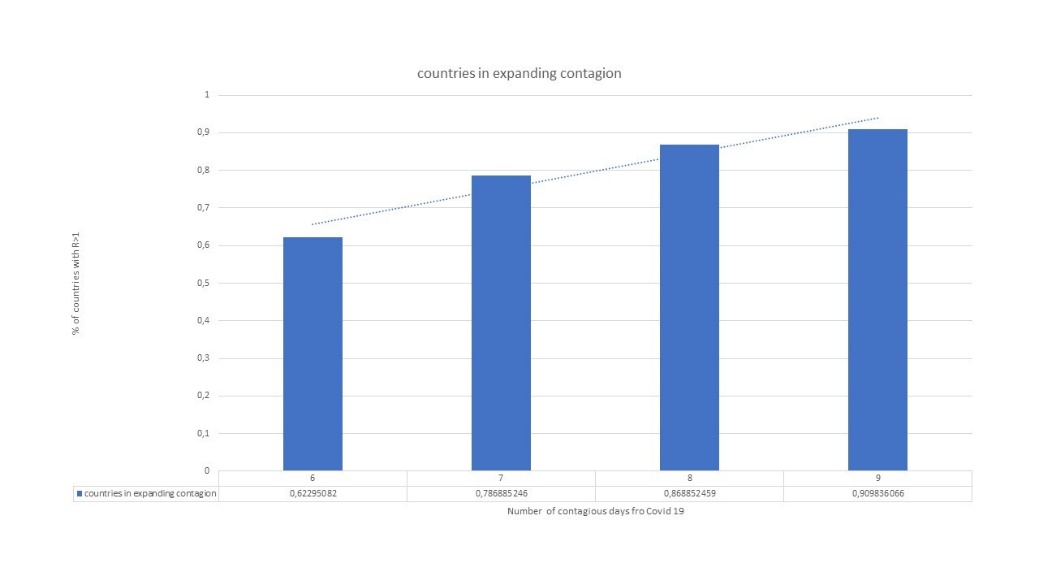 Given the decline in the reproduction rate in China, the world \(R_t\) tended to be in control at early march, but then the epidemic got to spread aggressively in Europe, and the estimated effective reproduction rate, \(R_t\), in a five days period, has been climbing during all the month of March, reaching \(R_t = 1.3\) (from March 23 to 28). And worse if we rather take the top quartile of contagion period (up to 12 days), we are mostly at 96% of countries in exponential mode, and with an estimated rate of reproduction at \(R_t = 1.6\) (reversely if contagion period is optimistically, only 6 days, like in the total of the flu, we would be at good news of \(R_t = 0.9\) but still with 2/3 of countries above \(R_t > 1\)):

Figure 2: Evolution of \(R_t\) - contrasting China and others 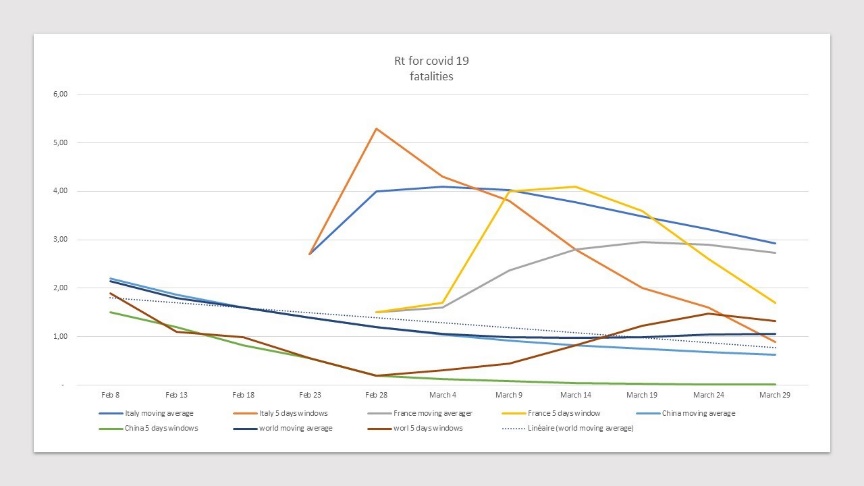 Such a «\(R_t\)» figure is clearly not adequate. A transmission rate, \(R_t\) at 1 (where we control the disease) and one at 1.3 means that in the first case, the pandemic will peak 36 days later, and the peak is flattened enough to have about 45% fewer daily cases to handle. Thus, a lower \(R_t\) buys much more time to secure enough qualified capacity for sanitary measures, as well as by avoiding healthcare supply chain disruption.

Further, time is important to process at scale better testings and spot risky individuals. Hence, China managed to build the right momentum to decrease it faster: China average \(R_t\) (computed as moving average through an interval of 5 days) declined by 9% every 5 days, from its peak to \(R_t < 1\) (achieved between Feb 13 to 18), while the decline in \(R_t\) was only half that for Italy between its peak and its successful \(R_t < 1\) (just arrived in the recent few days). France has yet to reach \(R_t < 1\), and if we look from its peak, France decline is only 3% every 5 days, or a 3 times slower pace than China. The message is thus clear; a low rate \(R_t\) achieved fast, both flattens the epidemic curve, and is a recipe for further containments, and lower pandemics.

So lets re-emphasise how countries can truly manage to control the epidemic, via the twin strategy of measurement and protection:

3. What gets measured gets fixed

One real danger of the current pandemic is the portion of unnoticed cases. As said above, the average latency period for COVID-19 is actually not small (5 days, and could even go to 10 days for 3 to 5% of cases), and thus any un-noticed case may be a very large contributor to the pandemic. Recent academic work suggests that only one out of 6 contaminations got noticed in Wuhan - the city which is the center node of the pandemic - before the authorities implemented by January 20; its radical twin approach of confinement and measurement. While milder cases seemed less infectious, their sheer number meant that they could have contributed in reality to 2/3 of contaminations in the early days of the outbreak in Wuhan.1

Such un-noticed measurement may seem large, but seems in the right ballpark, based on a few triangulations (see Figure 3).

Figure 3: Measuring and putting in quarantine unnoticed cases of Covid-19 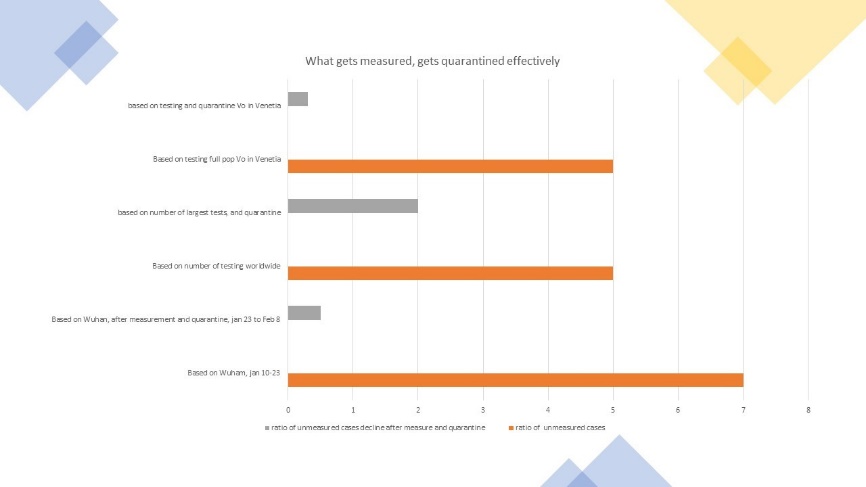 In a recent research on the healthcare workers perception in China, during the Wuhan outbreak, the share of workers reporting knowledge of sick people was about 2-3 times what was the official share of recorded infections in Wuhan2. When we look at testing made by countries, testing seems to turn positive at the margin for 3.0 percent of the people, with decreasing rate by 10% every 10 points of population tested. We had mentioned elsewhere that based on number of tests done in the course of March by South Korea, (500,000 tests, or roughly 1% of its population), South Korea managed to reduce its total death rate by 50% by now, as they could put more people in quarantine showing the importance of spotting those cases.

Finally, another fascinating example is the village of Vo, in the Veneto region in Italy, which went into quarantine lockdown by February 23. The strategy there was to combine quarantine and testing, with a staggering 97 percent of its population tested in one week. At that time, three percent of the population resulted in being positive, or roughly 5 times the actual number of recorded contaminations, for the population of the 11 towns put in lockdown in the Northern Lombardy. The operationalisation of the strategy was then to contact directly all those who tested positive. Asymptomatic cases or those with mild symptoms were quarantined at home, while those showing more serious symptoms (e.g. high fever) were immediately hospitalised.

In order to ensure compliance and prevent disease to worsen, contaminated people at home were called several times a day to make sure they were abiding the quarantine, as well as to test their evolution, e.g. through temperature.3

The strategy worked out superbly, as the repetition of tests by March 8th demonstrated that only third, or one percent of the population was still found positive, leading in reality to a major decline of \(R_t\) by Feb 23 evaluated at 2, to come to be \(R_t = 0.3\) by March 8th, or a reduction of close to 85 percent, we estimate. There is no new infection in the town currently, according to multiple media.

Finally, it is critical that people got protected, and with the right priority.

Many countries have understood the need to play the social distancing game, even if the game has to be balanced with the effective testing of the population (see above).

Given level of effectiveness and costs linked to social distancing, the priorities are often easy to establish, e.g. it is better to start with banning large gatherings of people, like theaters, cinemas, gyms as well as all market places. School closing and telecommuting always come second and third. The jury is still out regarding schools as COVID-19 has yet to affect children, and there is still large uncertainty as to how children may transmit the virus. However, one large benefit of school closures is to enforce adult parents to remain at home. The risk with telecommuting is lack of productivity, but the good news is that many workers have adapted rather quickly.

Another priority is to have an heat-map of industries at risk, and allocate protective resources accordingly, e.g. in healthcare. A large part of the necessary industries that need to work at full speed, involves likely large exposure to infected cases (e.g. healthcare at large, including pharmacies), and/or large number of contacts, that might increase the likelihood of contamination (e.g. retail, daily services, etc.). This is rather critical as the odds ratio of contaminations may be rather large, e.g. we estimate a odd ratio of close to 7, for healthcare workers in front line of the COVID-19 outbreak elsewhere.4

Again, countries in Asia were very quick in building effective healthcare supply chains to cope with the disease; online merchandising was also very effective in countries such as Japan, China, South Korea and Singapore. In contrast, many other countries got very late into securing those supply chains, like the US among others, and many European countries, being relatively overwhelmed to secure appropriate protective equipments for their health systems.

A final aspect is to make sure people keep delivering on the right protection measures, in terms of wearing masks, gloves, and washing their hands. There, as well, the respect of those rules look rather imperfect, according to multiple surveys.

Not surprisingly, Asia is much more abiding to those rules, and those are now part of the way Asian citizens nw leave. Everyone in China and Hong Kong has stocks of masks at home - and consumption of masks is as large as kleenex in Europe, it is said. Any commercial venue, or restaurant etc offers hydro-alcoholic solutions to wash hands; or there are workers systematically disinfecting any risky touch points in public space, such as doors, lifts, etc.

This is still something to make it embedded in our Western culture, if we want to leave at peace with the COVID-19.

© Jacques Bughin. Written March 29. Comments more than welcome. All errors are mine. References listed as they are found in the text