The COVID-19 is likely to pass the bar of 1.3 million recorded infected cases worldwide, and likely 70,000 deaths today, while driving a twin health and economic crisis feared to be like “no other,” as recently conceded by the Head of the IMF.

In effect, while many countries are in standstill, in the hope to flatten the curve, the tension has been building between « saving life » and « saving the economy». There is however a place where the two challenges meet, that is, social spotting and distancing of the infected, and relaunch of major investment in healthcare and technology.

The reason why this must be the direction to follow is that the chance of finding, and applying a vaccine to the whole population will be a few quarters away, it seems. In the absence of a medical protection, we thus must have a powerful nowcasting of the infected cases and their close social ties, so as to prevent a major outbreak to restart in a second wave. When doing so, the risk aversion of citizens may decline and allow them to go back to work and consume. Realistically, also , a “wave two” will likely emerge. If the first wave is indeed successfully controlled, this might imply that only 5% to 10% of the population was infected, while the contagious nature of the virus may likely aim to infect up to 3-5 times the current contamination level of the population. We thus must continue to invest and prepare the heathcare/food/utility system for those waves, and get ready on building the right stock of supply, for masks, respirators, food and necessary utilities, etc.

All the above is a major opportunity for digital technology and AI to become very complementary to the fight against COVID-19. Technology helps in so many instances: make people work remotely, ingest date real time to nowcast infections, and spot the infected and their social ties, decode a variety of test to improve on the low specificity of current COVID-19 tests, self learning algorithms to include for respirators and for drug releases in patients, and automated logistics for food systems. This technology roadmap, with AI and big data, at its core, is a unique opportunity to have technology at the service of society and our economy.

Where do we stand on this in Belgium? And how should we guide our main actions with regard to the above?

There have been multiple policy models used to manage the curve of the COVID-19 infections. Countries such as China, and many Central and Southern countries have enforced a major social distancing, while some other countries such as Sweden have bet on more limited, (self-induced) containment. Finally other countries, like South Korea, have been playing the cards of extensive testing and tracing.

Belgium has chosen the path of enforcing social distancing, with a progression of shutdowns, from heavy connected places (like concerts, and movie theatres) to school closure and telecommuting, and finally, social distancing in the public space. Belgium should be applauded for moving relatively early, after a few COVID-19 casualties, at possibly three to seven times faster than Italy and Spain. Belgium is also in the top 5 in EU-28, in terms of ICU bed capacity, making the health equation easier to hold.

On the improvement side, however:

3. Belgium in the coming month

As said those recent days by many voices, Belgium may be at the glimpse of “seeing some light at the end of the tunnel”. The recorded number of new infection cases may look like declining, even if the trend is more like a flat development, than a sure decline. Number of active cases continues to build up (as COVID-19 cases are solved in about 20 days, and 17/18 days for fatalities), as well is the number of deaths, yet with a lower growth momentum. Currently we have reached more than 1,600 deaths, or roughly 25% of fatalities of a typical flu epidemics in Belgium.

Figures show thus some encouragements, but we believe they remain fragile, and mostly because of a) clear view on the total infection cases, and b) dynamics of compliance to social distancing.

We resorted to some high-level simulations to see how Belgium can be played out; a high level appendix provides some backgrounds. We also did the high level simulations at a national level, and we assume a few conservative assumptions, e.g. contagious time is 8.5 days at hospital, recovered people are no longer contagious, testing build up will happen and be as effective in spotting portion of infected, etc. We finally compute how many people are truly infected today. We calibrate by April 1 on current infection records, which we know are biased downwards, as well as on a level of 50,000, and most likely 100,000 infected cases. The later emerges as the most plausible result from different triangulation benchmarks we have done recently. The model results, and sensitivity around them, lead to the three following messages:

The simulation results are thus very clear in the direction to go. First we must make sure to test and measure much more, and more accurately, and to socially distance close ties and social encounters at risk, of the contaminated. The reason is that this is the only model that modulate social interactions according to risk, and the only model that is sustainable with time, both for human living and economics.

On top of this, because the COVID-19 is still complex to apprehend, and inevitable new burst may come back as seen in Asia and China, we must continue to push for self protection measures, and offer the equipment for those protections. Without this, containment will not be fully effective, and may remain implemented for too long for our economies, adding an economic to a health issue.

We are possibly turning the page of wave 1 in Belgium — but this remains fragile. Even if we are - and we hope for - winning this battle, the war is not over, as a large population may still be not affected, fearing a case of a second wave.

We are thus in a major emergency to:

Note the logic of selectivity versus reach, here. The point is that we today, with possibly less than 10% of people affected by the disease, we confine 90% of people to reduce interactions with no impact, but with a large economic burden. If however, there are 10% that are to be targeted, and their tests are 70% right for 100% isolation, we still remain above the needed average threshold today - selectivity is a much better model, indeed, see Figure 1 (selectivity versus reach).

Figure 1: Going for selectivity (extensive testing) in the fight for COVID-19 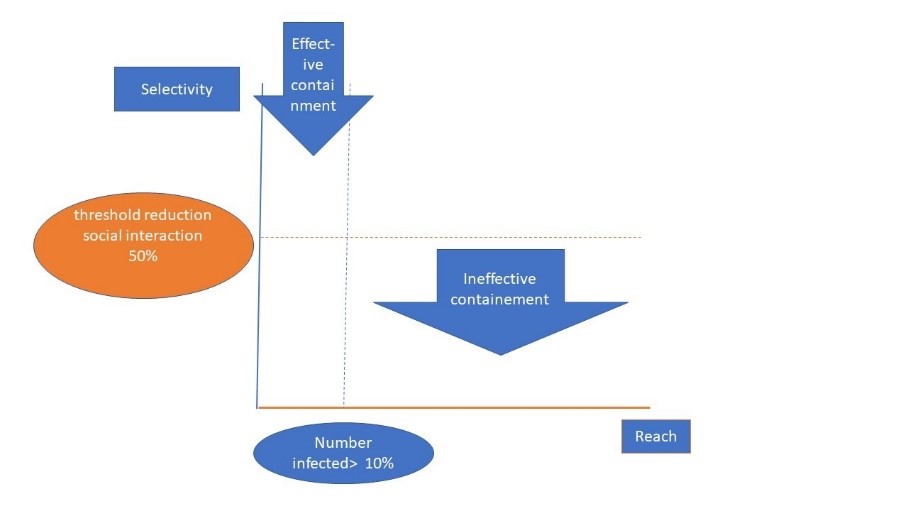 Let’s go fast and at scale on this road.

© Jacques Bughin. Written April 6. Comments more than welcome. All errors are mine. References listed as they are found in the text