How different are countries able to handling the COVID-19? We see major differences in the way COVID-19 spreads and takes life of citizens, worldwide. While the number of COVID-19 fatalities has doubled in the last 5, 7 days worldwide, countries such as Belgium have witnessed a doubling in fatalities in just 2, 4 days only (or twice faster than the world), while in Japan fatalities only double after 11 days (Figure 1).

Looking at how the number of infections is expanding, and comparing within each continent, so that we control better for the timing of the pandemic, Brazil is developing faster than Colombia in Latin America; US is growing faster than Canada, while in Europe, Norway is expanding slower than Italy. Asian Singapore is much better than Iran, and within Africa, Morocco seems to be less affected than South Africa.

Figure 1: Days to double the number of fatalities to COVID-19 (from March 25 backward)

Of course, the pandemic is only a few weeks old, which means that those differences may soon evolve and change. Likewise, the recording of cases may make the current comparison at best noisy, at worse, rather inadequate. But still, countries with large number of COVID-19 tests, such as South Korea, Singapore or Norway, have recorded a more controlled growth of their fatalities to date, and we have shown elsewhere that countries matching South Korea performance in test intensity may be curbing by HALF the new Coronavirus cases as infected people can be easily identified and put in quarantine, before contaminating other fellow citizens.1

2. How are countries exposed?

Further, independently of short term dynamics, some structural factors might affect how countries will come out faster, and better (or not) from the COVID-19, across three domains. The first is how well countries are able to control social contagion, the second is how countries can manage the fatality rate, and third is what socio-economic model to support the management of the COVID-19 outbreak.

Regarding social contagion, three factors play a role, that is, how countries fare in terms of social contacts in their daily life, how close those contacts are, and how people tend to react and protect themselves from contacts in case of an emergency such as an outbreak. If we take those indicators, Asians do very well, with 82% of Chinese wearing masks during the COVID-19 outbreaks, for about 76% of South Koreans. Europe is much less disciplined, and only in part because of lower availability of equipments.

On the other hand, the culture of protection is not only about wearing masks; more Asian people tend to wash hands in their daily life than in Europe, for example. Gallup data and Eurostat surveys in Europe had shown that Italy have much more social contacts in daily life than say, in Finland, but also that only 57% of Italians wash their hands after going to toilets, for 76% in Finland.

Finally, governments with a culture of testing, while restricting social distancing, via coercive measures and technology tracing are to be found again in Asia; in contrast, the Anglo saxon and calvinistic culture, such as the UK, US, or the Netherlands, have been much more loose in imposing social distancing restrictions, while their population testing is still in a ramp up phase, and three times lower in intensity than Italy to date. Countries like Brazil also tend to have large intensity of contacts and promiscuity, with a president claiming that a targeted social distancing is a much more effective strategy - if we can indeed spot the infected and protect the high risk groups.

Regarding fatality rate, factors are obviously linked to ageing and health situation of population, especially co-morbidity elements such as cardiovascular states or hypertension, diabetes or cancer prevalence. Europe has an ageing and old population, while the fatality rate linked to the COVID-19 doubles for every decade of life, from 30 years. Likewise, co-morbidity makes fatality 5 times to 10 times higher for someone infected by the COVID-19 than for another without any history of other disease(s). Even if we remove the fact that comorbidity increases with age, and doubles in frequency, on average, between 55 years old and 85 year old, this explains only 25% of the difference in fatalities for older population, so age is really the key driver of risk to die from COVID-19 infection, surely linked to the ability of the immune system to battle the virus.

Regarding co-morbidities, a country like Russia, or Poland, or still Spain fare much worse than say, India, China or still Japan. India has also a very young population, while Japan is relatively old as are Spain and Italy. The health system and its capacity to manage an outbreak such as the COVID-19 is critical, as fatality rates correlate with enough capacity of ICU beds, ventilator equipments, and adequate healthcare professionals. Asia is here again much better prepared with respect to capacity planning of healthcare resources, beds, and PPE, even if the quality of healthcare in some parts of Asia (and part of China) has yet to match the standards of Europe. While with good health quality, Europe has been struggling, and the current outbreaks in countries such Italy, with an ageing and high comorbidity population situation, has led to an excess demand of hospital treatments, at the expenses of the healthcare people themselves (with much higher infection rates than what was seen say in the Chinese Hubei region, it seems), or top of the infected, with a fatality rate close to 10%.

Regarding socio-economics, the economic outcome depends on risks (such globalisation exposure), cost of lost productivity and life (share of people affected and with fatal outcomes), and type and success of means applied to stop the disease (a clever model of spotting contagious nodes, and put people in quarantine is much less costly than a total cost of shutting down the economy, but to the extent that this model is available, and implemtable; in practice, for pandemic with high R Naught, this is rather difficult to make this work, and economic shutdown is the reality).

Regarding globalisation, small countries are penalized as their share of global exposure is larger. For instance, Germany is much less exposed than say Benelux countries. US has been exposed to China at the start of the COVID-19, following trade war with China, but since the outbreak is a global pandemic, US has become relatively as exposed than any other countries.

We have argued elsewhere that the real costs of a pandemic like the COVID-19 are first of all driven by a depressive demand effect, then within supply, to a shutdown effect, more than a fatality effect (as more fatalities happen at later age, outside of the productivity impact).2 The depressive demand effect is especially important for countries with large exposure to sectors such as entertainment, transport, automotives, retail, etc., and to the extent that countries finance the citizens for fall in revenue during the economic shutdown. Anglo Saxon systems are indeed more selective here in their revenue insurance. Hence, they may be in a more difficult situation to restart the economies than Western Europe. Hence, the major welcome of boost plan exceptionally passed at the US Congress, for example.

3. Double the risk: Brazil versus Israel or Ireland

We have started to collect data especially on the two first drivers. Data are only high level, as they have multiple sources of collection, and time dimensions. They originate from top level sources nevertheless, including multiple country studies in the Lancet, or academic surveys studies in terms of social contacts, etc. ( Figure 2). 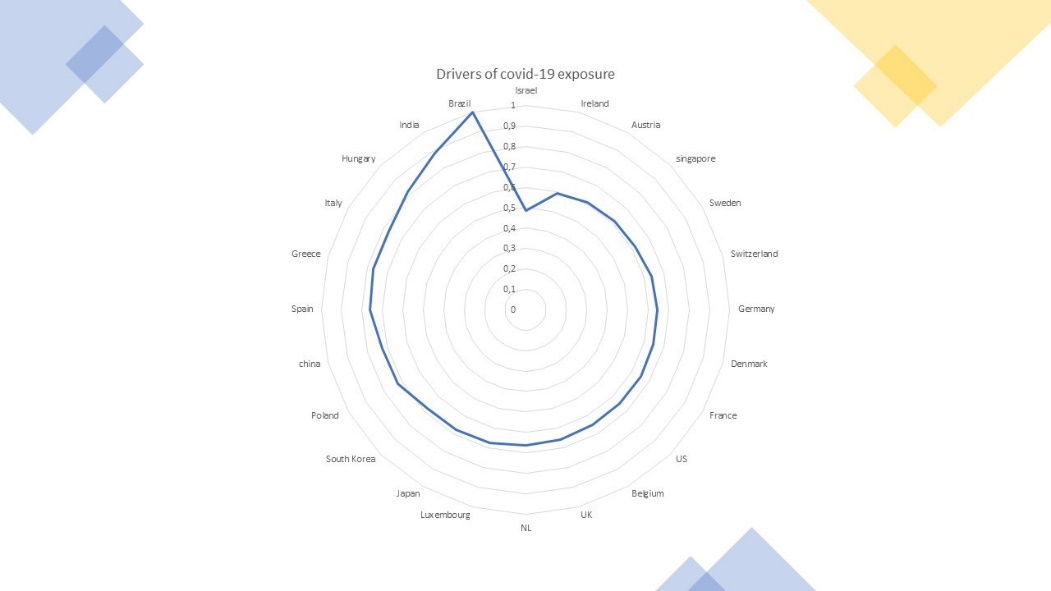 Countries where we collected data on health system quality, population age structure, co-morbidities, and social contact and washing hand sanity, etc are a few Asian countries, and mostly Europe. Taking a simple average of the performance metrics, we find that:

We thus clearly see that countries are not born equal when it comes to their exposure to COVID-19. Nevertheless, Asia is not that insulated from the risk of pandemic. What makes Asia successful is an clearly effective management of the crisis, with some apparent success. This will be where the success lie.

© Jacques Bughin. Written March 26. Comments more than welcome. All errors are mine. References listed as they are found in the text